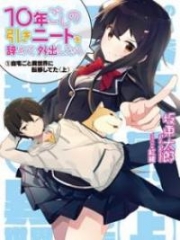 Houjou Yuuji, 30 years old, jobless, hikkomori for 10 years. Using his parents’ death as the impetus, he decides to rid himself of his hikkomori life and leaves the house. What awaited him, however, was a different world that he was not used to, creatures strutting about that he didn’t recognize.
This is the story of a man transported to the another world, as he lives in relative peace with his beloved dog Kotarou – his house, with electricity, water, gas, and the internet somehow still connected.
One day while exploring the forest near his house he finds a girl named Alice, and becomes her guardian. Thus, 4 years after he is transported to this world, Yuuji resolves to venture into his first town.

Into the Dark: The Shadow Prince

The French in the Heart of America

A History of English Romanticism in the Eighteenth Century